Single mom: ‘I’m finally going to have a place to truly call my own’

Verde Valley Habitat For Humanity would like to share this amazing story with you.  We have many stories of Homeowners locally that we have helped that are very similar but we thought we would share this one.  You will begin to hear the stories of our Homeowners in coming weeks. So please enjoy the story of this Fantastic Family! Rebecca Gremore digs the first shovelful of dirt Thursday, July 13, 2017 at the groundbreaking for the Habitat for Humanity house that will be home to her and her children.
(Photo: Gillis Benedict/Livingston Daily)

When she was a child, Rebecca Gremore and her family bounced from one place to the next.

At 9, she and her younger siblings were removed from their home, separated and placed in foster care.

On Thursday, Gremore, 33, attended a Livingston County Habitat for Humanity groundbreaking ceremony for the first home she will ever call her own.

Contrary to popular belief, Habitat for Humanity does not give away homes, but requires recipients to meet a long list of criteria, contribute 250 hours of “sweat equity” and take on a mortgage.

And that’s OK with Gremore.

“I’m finally going to have a place to truly call my own, that I’ve worked for,” she said. “I’m going to be paying on something that will be mine.”

A single parent, Gremore manages Toyology in downtown Howell, and said it was important her new home is located in Howell; she does not want to uproot her children, Anthony 12, and Dahlia,10.

“My biological mother liked to move a lot,” she said. “Before we were finally taken away and put in foster care, we had already gone through a million different schools.”

After being pulled from her home, she began a long trek through some “very bad foster homes” and lost contact with everyone in family. Her two younger siblings were adopted while she was overlooked by potential adoptive families, the way older foster children often are.

“I never got in trouble,” she added. “I wasn’t a bad kid. I always got straight As.”

When she was 16, things began to change; Gremore was placed in Howell with a couple she still calls Mom and Dad.

The couple saw how important it was for her to reconnect with her biological family; with their help, it didn’t take long to find her siblings, grandmother and other relatives.

After graduating with honors from Howell High School, Gremore began sharing her story to help train people prospective foster parents. She also worked with the Michigan Department of Human Services and met with state legislators to advocate changes in laws related to foster care. She ran a youth group for teenagers about to transition out of the system. 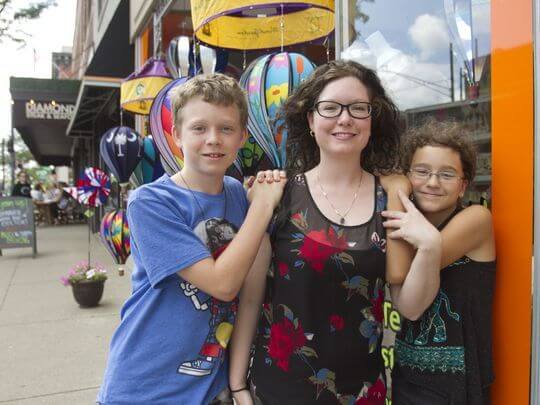 Toyology employee Rebecca Gremore poses with her children 12-year-old Anthony and daughter 10-year-old Dahlia Gremore in front of Toyology Friday, July 14, 2017. She and her family will have a Habitat for Humanity home built for them in Howell. (Photo: Gillis Benedict/Livingston Daily)

Someday soon, she intends to become a foster parent herself.

During her teenage years, Gremore also reconnected with her biological father, four years after she’d last seen him, and stayed close until he passed away in December last year.

The thought brings her to tears on the day she breaks ground on her new home.

“That was really hard,” she said. “He was super excited about the house.”

‘It’s about the family’

Gremore’s new two-story, 1,300-square-foot home will include three bedrooms, two baths, and a long front porch on a narrow lot on North Street in Howell.

It’s a far cry from the aging mobile home she’s currently living in, or the friend’s basement where she and the kids stayed during her divorce.

While the organization builds homes – with a great deal of support, donations and volunteer labor from the community – the projects are “not about the house.”

“It’s about the family,” said Livingston County Habitat for Humanity, Inc. Executive Director Larry Pfeil. “A very large percentage of all Michigan families who are renting spend more than half their…income just to pay for the roof over their head. They are essentially one paycheck away from being homeless.”

The result, he said, is often stressed parents who work two or more jobs, spend less time with children, and have higher rates of divorce and substance abuse.

“You take the family out of that circumstance, put them into a simple decent affordable house, all those things get reversed and the kids do better in school,” Pfeil said. “It’s an interesting thing to watch – and Habitat has found this all over the world – the family absolutely thrives.”

“They feel part of the community,” he added.  “They’re not moving all they time, they’re not threatened by landlords. They’re starting with a new home, so repairs are minimal.”

Although those chosen for a Habitat home must be gainfully employed, able to handle a mortgage and have a reasonable credit history based on personal circumstances, they are usually individuals who would be unable to obtain traditional financing.

Recipients pay a mortgage based on the cost of building the home, but the loan includes a zero or very low interest rate.  Repaid money goes back into the organization for the next project.

“Habitat is a hand up, not a hand out,” Pfeil said, noting he’s hoping to have the family all moved in before Thanksgiving.

“We’re going to have a very safe, affordable, permanent place for me and the kids to stay,” she said. “I plan to never leave; this is going to be my forever home.”

Habitat for Humanity is a non-denominational Christian-based nonprofit organization “dedicated to the elimination of poverty and substandard housing worldwide.”

©2020 | Designed and Developed by The Myss Miranda Agency