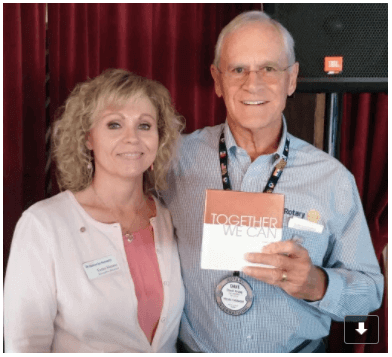 Verde Valley Habitat for Humanity Executive Director Tania Simms announced three homes will be built in Sedona during this year’s Home Builders Blitz July 28 to Aug. 11.  The two-week project is a partnership between Verde Valley Habitat for Humanity and the local building community to help more families have access to simple, decent and affordable housing. The Blitz will take place at Peach Lane in Sedona, bringing together hundreds to construct the homes. The club will be hosting hospitality for the build. Tania said Verde Valley Habitat for Humanity has built 14 homes and two remodels, providing homes for 16 families. She adds most are families of single mothers. She thanked the club for coordinating upcoming hospitality needs for the project. She also announced an upcoming fundraiser for the Builders Blitz on April 20, 5:30-8:30 p.m. at Courtyard by Marriott in Sedona and includes wine tasting from Cellar 433, food, and silent auction. Tickets are $50 per person. To purchase tickets go to www.vvhabitat.org. Club President Dave Young announced the book “Together We Can” will be donated to the Sedona Public Library on Tania’s behalf.